Showing posts from August, 2011
Show all

As a fun way to test the new opening suite feature , I conducted a fast match between the very strong Komodo 3.0 chess engine and the built-in Java engine of Chess for Android using the " beat the masters suite " (a version with 251 test positions). Komodo is clearly much too strong for my own humble engine and the suite was meant to test the quality of moves found by chess engines, not as an opening suite. Nevertheless, since some positions give one side a very strong advantage, it seemed like a fun way to test the new opening suite feature. The outcome was as expected: Komodo won most games and only a few draws occurred. However, Chess for Android had one victory. 1 Komodo32 3 AB    +491/  -1/=10 98.80%  496.0/502 2 Chess for Android  +1/-491/=10  1.20%    6.0/502 In the position below, with black to move and only half a second thinking time per move, Komodo played 1... Rxe2, which yields a lost position (black should have played 1...hxg6). Chess for Android did not
Post a Comment
Read more 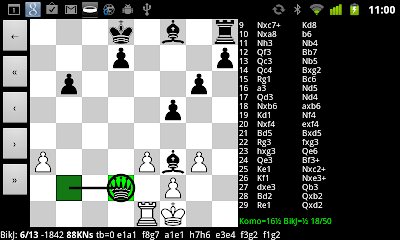 Chess for Android v3.0 is available from the Android market or as direct download . New features include: The possibility to play engine tournaments from both sides of any external book in PGN format, as explained in this blog posting . Layout and formatting improvements in the UCI analysis output window. Light grey board color. Relaxed FEN parsing to accept non-standard, but frequently occurring omissions in the FEN string. Ability to view simple cross-table while tournament is in progress (>> button).
2 comments
Read more 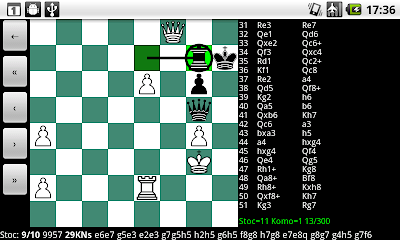 To eliminate the effect of opening books, it is a common practice to test the strength of chess engines by letting them play from both sides of a pre-selected set of opening positions. Earlier versions of Chess for Android already supported the option to play engine tournaments from both sides of 50 positions of the built-in book (yielding 100 games total between each engine pair). The upcoming 3.0 release will add the option to play both sides of any external book in PGN format, such as the famous " Nunn Positions " (published by GM John Nunn) or the " Silver Opening Suite " (published by Albert Silver). To use this feature, long press the notation window, and select "UCI Engine Support", followed by "Engine Tournament". Then select the "all games from both sides of external book". This will open a file navigation window, starting at the root of the SD card. Navigate into the directory and file of the desired opening suite. This
Post a Comment
Read more 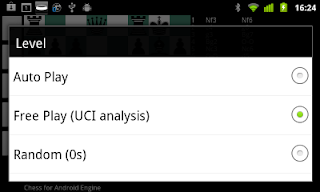 I just released version 2.9.4 for Chess for Android, available from the Android market or as direct download . This version introduces the much requested "infinite analysis" mode for an imported UCI engine, in which the engine reports its analysis of positions without actually making moves. To enable this mode, change the level to free play, as shown in the following screenshots. If an UCI engine is imported, its analysis of the current position will appear below the board. The user can freely play through previous games or make new moves. When at the end of a game still in progress, pressing the ">" button will play the best move found by the UCI engine. Changing the level, or unloading the UCI engine will exit the "infinite analysis" mode. Although the feature may seem simple, it was actually far from straightforward to implement, also because not all UCI engines behave the same for the "go infinite" command. Please let me know if yo
1 comment
Read more 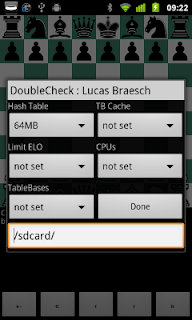 I compiled Lucas Braesch's DoubleCheck 1.1 for Android (ARM) and put it on the UCI Engines for Android website . The engine works reasonably well in Chess for Android. However, because the UCI command movetime is not implemented yet, it plays almost instantaneously, making matches to determine its strength less useful at the moment.
4 comments
Read more
More posts