Showing posts with the label chess challenger
Show all 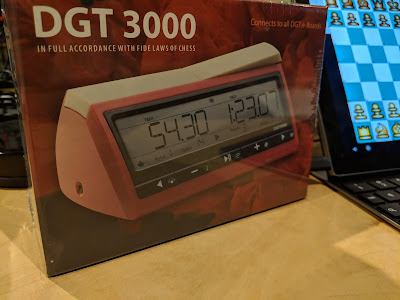 This beautiful DGT 3000 chess clock just arrived! I can't wait to start hacking and find out what features I can implement for Chess for Android connected to a DGT chess board and this clock. In particular,  am hopeful that the combination of online chess on FICS with an electronic chess board and clock will provide a very pleasant chess playing experience!
Post a Comment
Read more

As long as I am making a trip down to memory lane, I remember how happy I was when I got a Chess Challenger for my birthday in 1981. As a starting young chess player, I certainly learned a lot from playing this computer, and I was thrilled when I had beaten the highest level for the first time. It certainly has sparked my interest in chess programming. After playing for a while, I discovered that if Chess Challenger responsed to e2-e4 with e7-e7 from its random opening book, it could always be beaten at Level 1 through the game shown below. As depicted on the corresponding photo, the Chess Challenger would admit its defeat by flashing all 64 red indicators. [Date "sometimes in 1981"] [White "a much younger Aart Bik"] [Black "Chess Challenger (Level 1)"] [Result "1-0"] 1. e4 e5 2. Nf3 Nc6 3. Bb5 a6 4. Bxc6 dxc6 5. Nxe5 Qd4 6. Qh5 Qxe4+ 7. Kd1 Qxg2 8. Qxf7+ Kd8 9. Qxf8# 1-0 Although modern chess software is much more practical, it lacks some
Post a Comment
Read more
More posts