Showing posts with the label Nalimov
Show all

- August 23, 2010
I just released version 2.4 of Chess for Android at the Android Market with the following new feature: basic UCI engine support (ability to replace built-in Java engine with any third party UCI engine compiled "natively" for Android) Instructions on how to setup an UCI engine are given at UCI for Android . As far as I know currently only BikJump is available as stand-alone UCI engine for Android. Although stronger than the built-in engine, I hope I will be able to add links to much stronger third party UCI engines soon. Please note that support is still rather basic (elaborate setup, only tested on one engine, GUI does not support engine options, time control restricted to time-per-move, position sent as FEN, making the engine more prone to three-fold repetition, no tournaments, etc.). Nevertheless, I hope it is an interesting start.
5 comments
Read more 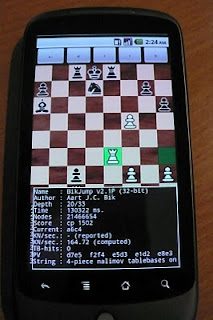 Here is an UCI engine running on a Nexus One in Chess for Android, probing the complete 3- and 4-piece Nalimov endgame tablebases (29.6 MB) from SD card. Here is a screenshot where the UCI engine already reports a mate (using the tablebases), while the internal Java engine only reports a negative score for white given a search tree of depth 9. Steps to make this work are shown at UCI for Android .
2 comments
Read more 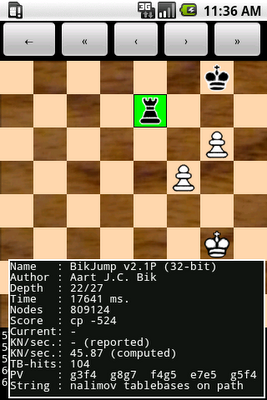 The UCI engine output is now presented in a slightly better format, where information is broken up into individual fields. Also, I have compiled BikJump v2.1 natively for Android, which is more elaborate multi-threaded bitboard-based engine that also supports the Nalimov endgame tablebases (with kind permission from Eugene Nalimov and Andrew Kadatch). I copied a few tablebases into the emulator's SD card and started the engine analysis. As can be seen in the screenshot below, the engine together with the probing code run fine on the Android emulator.
2 comments
Read more
More posts