Showing posts from November, 2008
Show all

Chess and Reversi for Android 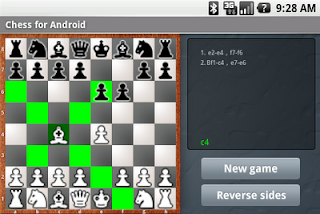 If you have a G1 Android phone, you can try out two games that I developed. They are available for free at the Android Market . Chess for Android is a simple standalone chess application, consisting of a chess engine (derived from BikJump) together with a GUI (thanks to Joseph Wain for designing the chess graphics). The application accepts moves through the keyboard or touch screen. Once a source square has been determined, all valid destination squares are shown in green. The engine plays at various levels (including random or against itself). Reversi for Android supports keyboard and touchscreen input, and displays all valid moves through labeled "ghost" stones. This engine also plays at various levels (including random).
Post a Comment
Read more

- November 21, 2008
My attempts to get consensus on standardizing an option to define the number of processors for an UCI engine on talkchess failed miserably, so I simply picked "Processors". The output of the prototype Deep BikJump on the "uci" command is shown below. id name BikJump v2.1P (64-bit) id author Aart J.C. Bik option name Hash type spin default 32 min 1 max 65536 option name NalimovPath type string default option name NalimovCache type spin default 8 min 1 max 2048 option name Ponder type check default true option name Processors type spin default 1 min 1 max 4 uciok I completed the threading toolkit for Linux and MacOS using pthreads and for Windows using the Windows threads. The latter was slightly more elaborate as I found out that CONDITION_VARIABLE (a synchronization primitive) is only supported on Vista, but not XP. Since I want to keep BikJump as portable as possible, I had to rewrite the Windows version using the slightly less elegant, but more widely support
Post a Comment
Read more

- November 13, 2008
The 32-bit version of BikJump v2.01 (after a minor bug fix) received a first rating of 2103 RUEL . Since this was tested on a Pentium IV processor (not good for bitscans), I am looking forward to get results back for the 64-bit version running on a Core 2 Duo or Quad platform. In the meanwhile, I have started work on Deep BikJump, featuring multi-threading to perform the search in parallel (commonly referred to as SMP support). Upcoming versions will be designated with the suffix P (e.g. v2.1P) to denote this new parallel support. Because I want to continue support for all major platform (Windows, Linux, and MacOS), I am working on a small threading toolkit that provides the right abstraction for keeping the major part of the chess engine unaware of details on Windows threads and pthreads.
Post a Comment
Read more

- November 11, 2008
Besides switching to a home-brewed bitboard representation, other parts of BikJump underwent refactoring as well. Some modifications turned out to modify strength negatively. I already wrote about null moves below. Furthermore, because the new bitboard move generator generates legal captures much faster than all legal moves, the quiescence search originally had been modified to look at captures only. After including checks again in the first few nodes, some bad tactical errors were avoided. Similarly, late move reduction had become too optimistic, and needed some adjustment towards the scheme used by the older BikJump. The "perft" nodes-per-second performance (which everybody measures differently; I simply traverse the complete tree with the same move generator that is used in search, including some bookkeeping) is about 13000KNs on a 2.66GHz Core 2 Duo. The nodes-per-second of the actual search in the first Nunn position is now about 1070KNs (64-bit) and 790KNs (32-bit
1 comment
Read more

- November 10, 2008
While I am struggling to translate all "improvements" of BikJump v2.0 into actual stronger play, BikJump v1.8 became third in group A of the 5th Division WBEC Ridderkerk edition 16 and qualified for the final.
Post a Comment
Read more
More posts