- August 06, 2010
Version 2.3 of Chess for Android has following changes:
There are now five on-screen buttons. The first one is:
The replay buttons are useful to navigate through a game without discarding any moves. These buttons are only accepted when the engine is not thinking, and work as follows:
During navigation, all subsequent moves not played yet are greyed out (see screenshot). Playing any move while navigating (including switching sides) discards all following moves (even if the moves matches the subsequent play; use replay buttons to maintain the current game). As before, long pressing the notation window enables the user to export the game as PGN or FEN. The game will be exported at the position of navigation. Saving a game to file will always store all moves of the current game. 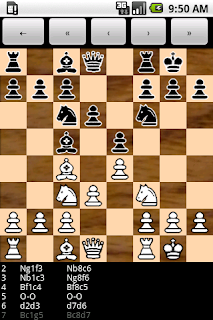 Since there are quite a few changes this time, please let me know if you encounter any issues.

Update: despite lots of testing, a few things fell through the cracks in v2.3; all known issues fixed in v2.3.2 [many thanks to Robert for reporting a Droid control issue]

Anonymous said…
Thank you for making this great chess game. I've had tons of fun with it, and some frustrating moments as well. :o)
August 8, 2010 at 12:55 AM

thatguywhojuggles said…
Can I suggest something for the next update:
When playing two player, it would be nice if there were a mode that would flip the board around after each move so when handing the phone back and forth, both players get to see the board as if they were seated behind it.
August 8, 2010 at 12:13 PM

Unknown said…
I really enjoy your program, Aart. I think it would be a great improvement if you could add a function that would tell you what move the computer would make if it were you in the current position. Along the lines of "what should I do now?" It would help the learning process.

Tom said…
I just downloaded the app in time for the latest update. It's been brilliant so far. I'd like to request on small addition: Display of 1-8 and a-h for rows/columns.
Thanks!
August 10, 2010 at 12:03 PM

Nickolay Shmyrev said…
Thanks for a great application.

I so much liked undo button in the bottom. It's damn hard to press it now when it's in the top line. And navigation kind of useless for me, just a waste of space to be honest.
August 10, 2010 at 3:26 PM

Kel said…
Three Fold Rep is at disadvantage to the player. It works great for the computer but not for me. I can return to the same spot with the same piece over and over without the computer acknowledging this and calling a draw. I guess that's what happens when your opponent is the arbitrator! Ha Ha
August 20, 2010 at 11:30 PM

Aart Bik said…
Hi Kel,
The three fold repetition detector is shared between both sides, so there should be no advantage to either. Can you please post a PGN of a game to illustrate your point?
August 20, 2010 at 11:44 PM

Kel said…
Thanks for your response, and the great chess game you've created. Yes, I will post a game transcript as soon as I have a good example.
August 21, 2010 at 8:23 PM