- September 28, 2019
Many users of Chess for Android use the combination of an electronic chessboard (Certabo, DGT, or Millennium) and online play, where making moves quickly can make the difference between winning or losing. In the past, I have made improvements that enabled quicker castling and taking en-passant. However, one request for quicker promotions was still pending.

However, during rapid games, even this simple procedure may be a bit cumbersome. Therefore I added an extra option to Chess for Android. While setting up the electronic chessboard, you can now also select the "Always Queen Promotion" option. With this option, moving just the pawn will register the promotion into a queen right away (and send the move to the online server when connected). This enables players to replace the pawn with the queen outside their own time. Minor promotions are still possible with this new option, but require the second way described above.

The new feature will be available soon on Google Play! 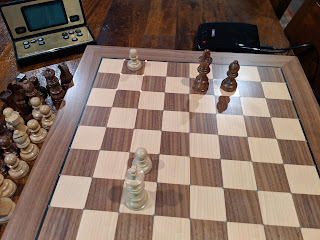 The UCI engine setup dialog in Chess for Android was developed a long time ago when there were not many chess engines available for Android. As a result, I opted for a simple dialog that featured a few, commonly used UCI engine options only (such as hash table size, number of threads, endgame tablebases). However, the options that I picked almost ten years ago no longer serve the wide variety in options of the many chess engines available for Android. Therefore, I decided to re-implement the UCI engine setup and do what the UCI protocol specification actually intended: the GUI should parse all options and build a dialog that allows the user to change them. For engines with only a few options, this yields a concise dialog, as illustrated below with BikJump v1.8. For engines with many options, this yields a more elaborate, scrollable dialog, as illustrated below for Leela Chess Zero. In any case, however, the new implementation gives the user full access to all options! Expect
Read more