Opening Books in Chess for Android

- March 11, 2016
I got several questions on how to use the opening book features in Chess for Android, so I hope this blog posting will be useful.

By default, the GUI uses a built-in opening book before it consults any chess engine, either the built-in Java engine, or an imported third-party chess engine. This small built-in opening book (consisting of few opening lines I studied a long time ago as a young member of a chess club, by the way) provides some variety of play, but otherwise is probably not sufficient for the more serious chess player. Therefore, before using an engine's own opening book, one has to disable the GUI opening book, by disabling the "Use Book" choice in the options menu, as shown below (touch to remove the check mark). 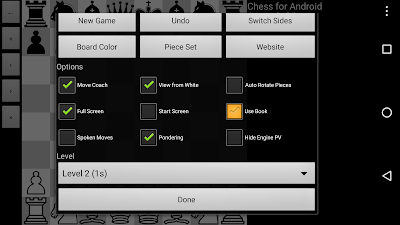 It may seem a bit counter-intuitive to disable the "Use Book" feature in order to use an engine's opening book, but without doing this, the GUI will first consult the built-in opening book before consulting the engine, so the engine will only start to consult its own opening book once the GUI runs out of its own. Just think of this feature as "Use GUI Book".

With this being done, there are two ways to enable an engine's book. First, let's assume you have installed an opening book someplace on the SD card, say in /sdcard/book/komodo.bin on the phone. Then, when setting the options of an UCI engine during the first import (clear the engine options first if you imported it earlier), fill out the opening books path accordingly, as shown below. UCI engines that don't support this opening book feature will have this part grayed out. 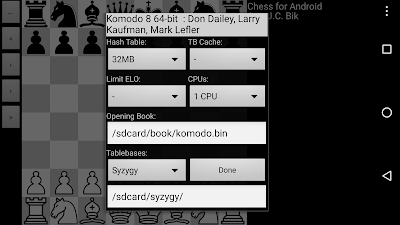 That's it! After this, the engine (Komodo in this case) will use its own opening book (don't remove the opening book from the SD card though, it is not copied to internal memory).

Alternatively, if an engine does not support this feature, but it does try to read an opening books from the current directory in which the engine is started, the following trick may work. Simply install the opening book as if it were an engine, see below. Note that this only works if the engine expects an opening book with that name in the current directory or if one can somehow define this information through an initialization file (viz.an engine.ini file, which can be copied to the same directory using the trick described above). 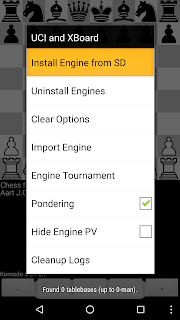 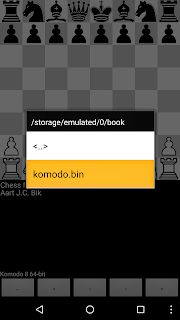 Happy opening booking! Please let me know if you have any more questions.