- December 25, 2008
Version 1.2 of Chess for Android at the Android Market has several improvements. The first is the much requested "undo" feature, where up to eight plies (half-moves) can be taken back to correct mistakes in the input (or mere blunders, as for black in the screenshot below!). 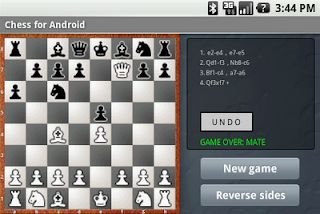 The second is a "free play" option, where the phone can be used as a "magnetic chessboard" to study games, or play a game up to a position for further play with the chess engine (this option, like the different levels of play, can be found under the "Menu" button). Furthermore, move highlighting has been modified with a black border, which looks slightly better along files and ranks. Finally, a few rules were added to evaluation function of the chess engine. 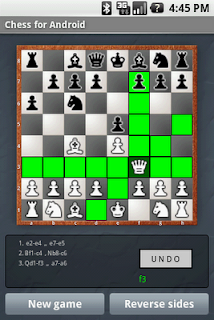 Bruno said…
Thanks for the update on the chess game. This is much better. You are right the black outlines are much clearer. This is great.

The final feature that would make it done in my book would be save on exit. I often start a game without enough time to really finish it. It would be great if the game could be resumed when next the app is started.

Aart Bik said…
Thanks again for your feedback. The "save on exit" feature is not yet first on my todo list, but I hope to get to it eventually. Stay tuned on this blog!
January 5, 2009 at 4:30 PM